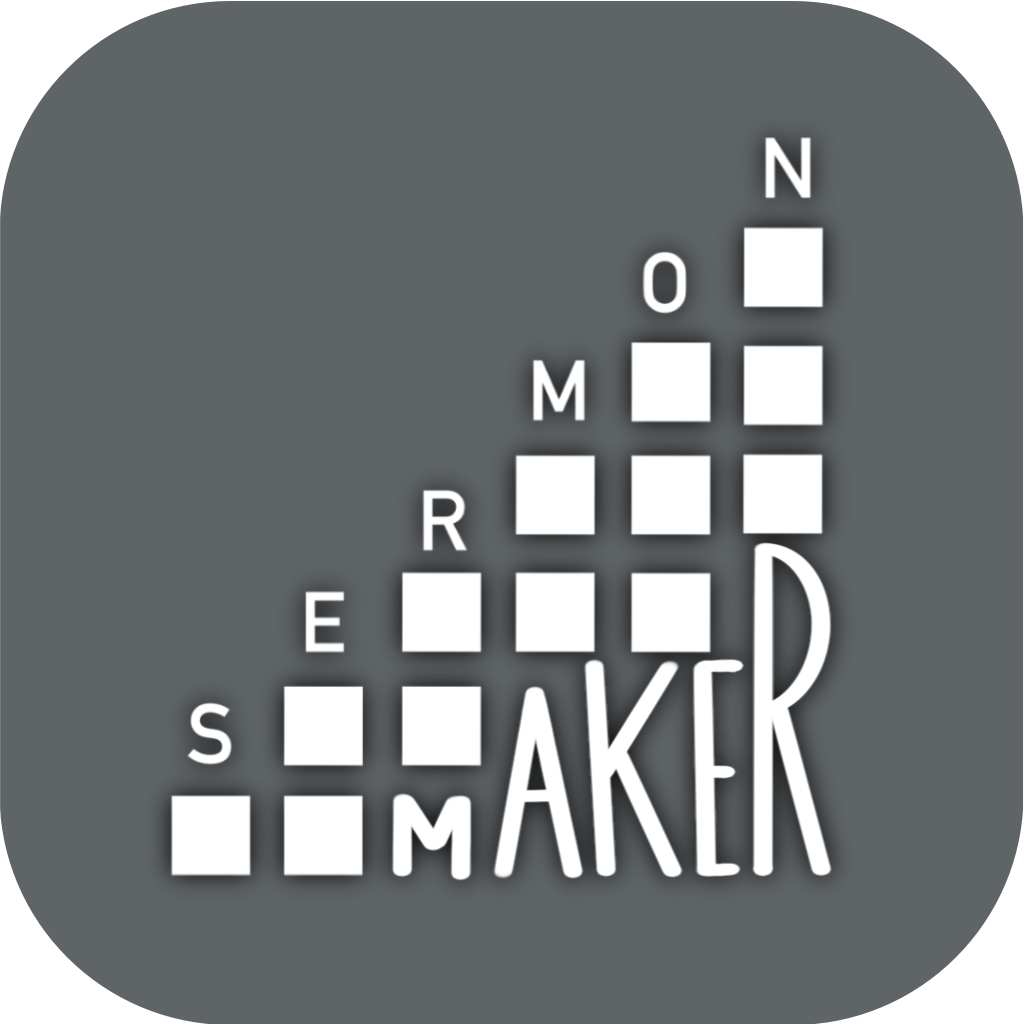 The app is compatible with English, Spanish, German, Italian, French & Portuguese languages. Works with DarkMode and LightMode within the app. It allows the user to change the font colors in the different sections of the app including in sermons and devotionals projects. It has wordcount for each section and total words, and many other features.

The main reason you would want to use this app is to unify the way one build sermons and devotionals, that is why this app was intentionally designed to do that. Also, if you are interested in sharing some or all of your sermons or devotionals with all of Sermon Maker’s community, the app has an optional activation of a public database. You can check the tutorial’s page for FAQ & help.

At his point, Sermon Maker does not have a feature to be able to print the projects by itself. So you will need to have an iPad or a Mac in the pulpit.

This app was designed and developed by Ronald Steinvorth Berrocal, a Vineyard’s movement pastor from Costa Rica. Pastor of Viña Oeste la Guácima.

If you want to learn more about how to make sermons, support the development of Sermon Maker or simply bless the developer you can go to our Patreon page.

Some of the new features in the latest builds:

Some older bug fixes and upgrades:

1. CoreData/iCloudKit private and public databases to store and synchronize user’s projects in all devices (iPads, iPhones and Macs). To be able to activate and use the public database you’ll need to accept the sharing terms and conditions that includes that everyone can freely use all the public info that is voluntarily shared in there.

2. Filter search for projects saved in the private & public databases (CoreData/iCloudKit). These features makes much easier to search for a project into the databases.

3. English, Spanish, German & Italian languages switch for the user interfase inside de app. If anyone wants to help me translate to add other languages, just send me an email.

4. Wordcount for all texts (deactivated by default), because this needs to have a faster device. You can activate/deactivate anytime this feature in the app’s settings.

5. DarkMode/LightMode switch inside de app, without needing to change your device’s settings.

6. Ability to change the fonts colors and sizes of the different sections of the project.

7. Portrait and Landscape mode compatible in all the app’s interface. This is specially useful in the iPads and Macs that are the platforms which are better to use this kind of apps to write sermons.

8. Picture of an example project to see how the app works. You can use this in app’s Settings. Also you can access the public database to load and see examples projects from other users of the app that wanted to share them.

9. Links to BibleGateway, YouVersion’s Bible and BibleHub websites inside the app. Note: Sermon maker don’t have any affiliation with those sites which are free to use to everyone.

10. Added options to activate and deactivate the projects types of (Sermons/Devotionals). Devotional are now deactivated by default. Anyone can activate them in: Settings, Project Types. (Added in Sermon Maker v5.8.2).

11. Added an “import button” & a “share button” to be able to send or receive sermons projects files you “Exported/Imported” easier to or from other users. You can use AirDrop, Email, iMessage and any other options that Apple offers in their sharing features. When you receive the “exported/imported file” just save & replace the existing file in your Sermon Maker’s directory in “On My Device” in the Files app. (Added in Sermon Maker v5.8.2).

12. Added “Export & Import Files” to external storage in JSON format. The exported files can be shared, accessing the device “Documents Directory” using the “Files app” and choosing “On My Device” where you will find a new “Sermon Maker directory”. You can send to anyone this exported file to share a sermon or a group of them. Or simply, you can use this file to make an external backup of the sermons you choose to include. If you want to import files just save and replace that file in your device. This will NOT affect your CoreData/iCloudKit files & synchronization. (Added in Sermon Maker v5.8.1).

13. Added an example project in the Exported/Imported Storage. This example project will appear if you haven’t exported or imported any file. (Added in Sermon Maker v5.8.1).

14. Finally all the TextEditors are resized automatically, even if the project was imported. This is only available in iPads and Macs. (Added in Sermon Maker v5.7.5).

15. Now the users can change the “sub-points and sub-points verses” order just clicking a small “up or down arrow” inside the “Sermon Settings“. This makes the app more flexible and will make happy many of the Sermon Maker users! (Added in Sermon Maker v5.6.6)

16. Added the feature to remove the “Main Verse” from the structure and complete sermon. This is helpful specially in thematic sermons that are not based on a main verse. (Added in Sermon Maker v5.6.6)

17. Added the feature to remove the descriptive numbering of any of the main points. (Added in Sermon Maker v5.6.6)

18. Now the users can dismiss some of the alerts, directly when the message is displayed, if they don’t want them to be shown again. Of course, you can turn them on again in the user’s settings. (Added in Sermon Maker v5.5.9)

19. Now you can hide and unhide different sections of the sermons. This makes the writing experience faster because you can hide the views of the other parts of the sermon that you are not working at the moment. Of course you can unhide them when you want. This feature also helps the users to hide parts of the sermon that already where spoken so it’s easier to not get lost while preaching. In the iPhones it’s deactivated by default cause this feature is not practical without SplitView, but the user can activate it in settings if he wants to.

20. You are able to make public (only the projects you want) with all Sermon Maker’s users using iCloudKit’s public database. For security reasons, only the app ADMIN can delete projects from the public database. This feature make Sermon Maker not only valuable by its functionalities, but also for its contents. When more and more people decide to feed the public database everyone will benefit from other’s sermons & devotionals. Let’s all start sharing for the Kingdom of God to expand!

Soon a future release of Sermon Maker will be released (v7.5.x)

The future Sermon Maker v7.5.0 will be prepared to have more features that will be only available in the new iOS 16.x, iPadOS 16.x and macOS 13.x. Stay tuned!

I’m working hard trying to find ways to implement some new features like: